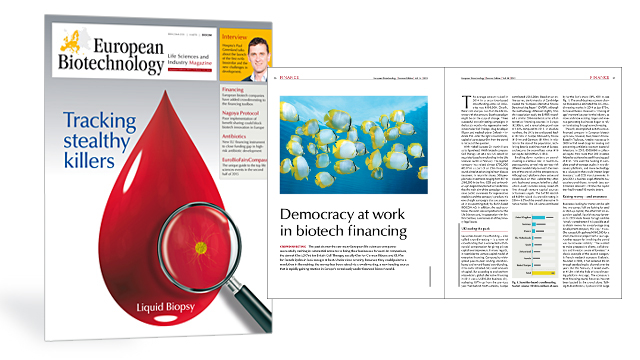 Democracy at work in biotech financing

The average amount raised in 2014 in a securities-based crowdfunding across all industries was €300,000. Clearly, there’s not a lot you can do in the Life Sciences with that amount. But the para­digm might be on the cusp of change. Three successful crowdinvesting campaigns in the last six months – by regenerative medicines maker Cell Therapy, drug developer Riboxx and medtech player Eyebrain – indicate that under the right circumstances, capital of up to about €1m from the crowd is not out of the question.

With Nobel laureate Sir Martin Evans as its figurehead, Welsh biotech company Cell Therapy Ltd set a new UK record for securities-based crowdfunding in the Life Sciences sector in February. The regmed company has raised almost £700,000 (€0.97m) as part of an £1m financing round aimed at advancing its heart disease treatment. In return for shares, 306 people made investments ranging from £37 to £108,000 in the firm. CEO and co-founder Ajan Reginald explained to EuroBiotech that the main aim of the campaign was to raise public awareness for regenerative medicine and the company's product. It’s one of eight campaigns that are presented in an upcoming study by Berlin-based BIOCOM AG. In addition, the study scrutinises the most relevant platforms for the Life Sciences and, in cooperation with law firm Dentons, summarises all of the primary legal issues.

Securities-based crowdfunding – also called crowdinvesting – is a form of crowdfunding that is connected with financial compensation for giving private capital to entrepreneurs. In many regards, it resembles the venture capital model of enterprise financing. Compared to widespread peer-to-peer lending, donation-based and reward-based crowdfunding, it has so far attracted only small amounts of capital. But according to analysts from Massolution, global alternative financing in 2014 was a US$16.2bn business, skyrocketing 167% up from the previous year. Well behind North America, Europe contributed US$3.26bn.

Read the full background on crowdinvesting in the Life Sciences in our print magazine!