Germany is the first country that has granted full approval to Adrenomed to conduct a Phase II study with the monoclonal antibody adrecizumab in patients with early septic shock. Within the ADR-02 study, 300 patients will be enrolled in Germany, Belgium, France and the Netherlands for proof of safety and efficacy.

German corporation Adrenomed AG has received the favorable opinion of the Central Ethics Committee of the University of Aachen for its Phase-II study ADR-02 (AdrenOSS-2), a randomized, double-blind, multi-center study, which will recruit 300 patients with early septic shock in Germany, Belgium, France and the Netherlands. Together with the approval of the German regulatory authority Paul Ehrlich Institute (PEI), received in July 2017, the ADR-02 study is expected to  be started by September in Germany.

In this proof-of-concept (POC) study, Adrenomed aims to demonstrate that its human monoclonal antibody Adrecizumab is safe and well tolerated and can improve outcomes in patients with early septic shock who show increased levels of the targeted vascular biomarker bio-adrenomedullin. Adrenomedullin, a vasodilatory hormone released by endothelial cells, is a key regulator of blood pressure and vascular tone and plays a pivotal role in the development of septic shock.

„We are delighted that the Paul Ehrlich Institute has granted approval for the ADR-02 study as it is the next crucial step to demonstrate that Adrecizumab has the potential to reduce the high mortality rates from sepsis,“ said Andreas Bergmann, PhD., Chief Scientific Officer (CSO) of Adrenomed. „Sepsis affects millions of people globally. To date, there is no causative treatment for the systemic inflammation that leads to multi-organ failure.“

Under the terms of the agreement, VectivBio will acquire Comet Therapeutics in exchange for equity and cash payable at closing, as well as additional...

The Allschwil-based company announced that in its Phase III study MODIFY, lucerastat did not meet its primary endpoint in patients with Fabry...

As a result of this designation, the Greek regemed specialist and the US specialist for automated local production of autologous cell therapies will...

The company said it will use the funds to expand production capacity for its enzymatically produced synthetic (“doggybone DNA™”) DNA vector, dbDNA™... 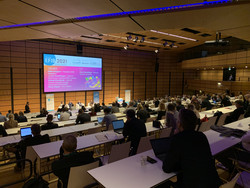 Abexxa focusses on the development of specific antibodies to intracellular antigens presented by the non-classical MHC Class I molecule, HLA-E (human...