A current Nature study specifies the most competitive health biotech sectors worldwide and puts Switzerland at the top, Sweden second and the USA third. Does the new math convince?

The authors have seen inconsistent reporting and inconsistencies in the data in many national or international studies before, making a comprehensive approach to gauging the relative strengths and weaknesses of national biotech sectors rather elusive.

John Hodgson (a stock analyst with European Biotech News) and Deanna Schreiber-Gregory introduce five “pillars” of data they compile and combine to give respective rankings of the nations under investigation. The pillars focus on “Public Biotechnology” with data from Nature Biotechnology´s surveys of public listed biotech companies, the “Education” pillar reflecting the efforts made in nations education in STEM subjects, e.g. the amount of university degrees and students, the “Investments” made for R&D, “Fundamentals” involving societal factors and the “Research and Translation” pillar, showing the R&D efforts. All pillars should elucidate strengths and weaknesses of national biotech sectors.

The Nature study revealed Switzerland, Sweden and the United States as top nations followed by five European nations and Israel and Singapore as the top ten leading biotech countries. Switzerland tops the ranking in relation to public sector/stock exchanges with its competitive multinational pharmaceutical sector. It is followed by Sweden, the United States and Israel. Israel, Belgium and the Netherlands perform well in education and research as well in finance. 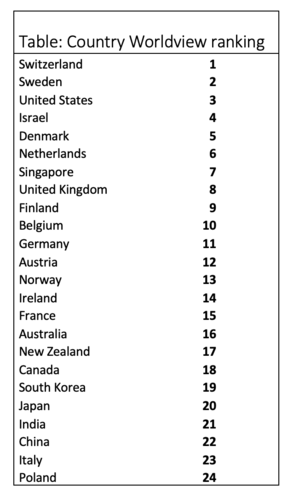 This came as a surprise, as almost everyone on this globe believes in the ranking position one for US biotechnology. The authors see US top in all investigated sectors, but it falls behind in education. The reason for this, lays in the private investment in education. The ranking system, underlying this survey, focusing on public education diminishes the US education score in relation to other countries. In addition, only a minority of students (17%) do choose STEM subjects overseas, whereas in Singapore or Germany about 30% chose such education, which explains the lower number of scientific staff in the US.

Nations outside United States and the Western Union investigate highly in Education, especially in STEM subjects. European Eastern countries lead the ranking in education and STEM careers through investments in these areas. Some nations like Finland, Estonia, Hungary, Poland and Czechia are positively influenced by membership in the European Union, so many students can study abroad.

The Netherlands biotech sector ranks very high, as six in the world. Also, the Dutch biotech industry has grown and ranks now ahead of the UK, Germany and France. Notably on the global scale, nations out of US and Western Europe spend less venture capital in biotech. Ranking of biotech sectors depends on which selection criteria will be focused. Countries differ in strength of the five chosen aspects. For an objective comparison of the nation’s biotech sectors, the different conditions of the countries were considered.

In this survey nature choose the focus on companies with intensive investment in R&D within the area of healthcare. This definition excluded many related companies. Because of financial variables, indexed data were used. Benefits of some companies, due to networking or other advantageous resources were excluded, because all health biotech companies have same conditions in the commercial market, ruled by the United States, and have the same network effects. The present nature-study claims to use more transparency regarding data sources and methodology than previous analysis of Scientific American’s Worldview, published between 2008 und 2018, because of broader data source and more quantitative data.

Whereby European nations spends most efforts in education, Luxembourg at the top, the United States emphasis in the Public Biotech Company, Investment and Fundamental sector. Canada spends most in venture investment for biotech and has the most research publications. A key finding in this nature study is, that the assumption, the United States has the strongest biotech sector cannot be confirmed. The comparisons sofar disregard the size of a country in respect to the density and intensity of biotech efforts.

The authors conclude with a clear “caveat”. Biotech is globalized, there lays the pitfalls for a national comparison of biotech industry sectors. Companies are international, scientific stuff is represented in many countries and the location, where innovations are made, can differ every year. More data sources could be added to the survey and it will be of interest how countries move in the ranking over the years. The general ranking is the complete performance of a nation in all five pillars.

Viola Bronsema, managing director of BIO Deutschland, positively comments, that the study makes a “more transparent” picture of international rankings from health biotech sectors. “The approach of Hodgson and Schreiber-Gregory is an interesting and respectable attempt to compare biotech nations”, she certifies the authors efforts, but annotates, that “the comparison works at least as far as Germany is concerned, in showing the strengths in the German education system and the rule of law.” Furthermore, she sees a problem in the underlying data set. “The exclusion of so many companies that clearly belong to the (health) biotech sector is a weakness of the ranking. In Germany biotechnological services offered by SMEs are the backbone of the biotech and pharma industry." Therefore, she argues, the ranking should be called a "Worldview national ranking of very R&D intensive health biotech sectors.”