Nearly a decade after the financial crisis, the European Life Science sector is flourishing again and has reached a momentum that was quite unforeseeable in the aftermath of 2008.

Euronext established as listing venue of choice for the Life Science sector.
In 2014 and 2015, companies reached a record high in matters of revenues, net income and initial public offerings (IPOs). Indeed, in 2014, more than 50% of European companies increased their R&D spending.

Euronext, which is based  in France, Belgium, the Netherlands and Portugal, and since September 2017 is also present in Germany, Switzerland, Spain and Italy, has dedicated resources over the past five years to financing SMEs with a focus on Tech SMEs and in particular on Life Sciences. Euronext is committed to support the European Life Science industry and contribute towards their efforts to raise money and create jobs. This has been successful with 49 Life Sciences IPOs since 2013 on Euronext markets, making Euronext the listing venue of choice for the life science sector from domestic and non-domestic European countries. 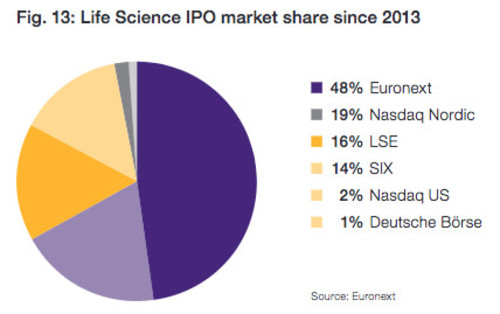 Euronext is the largest Life Science stock market in Europe

The sudden boost of the biotech sector in 2014, was seen on Euronext faster than on any other stock exchange. That same year, the German company Probiodrug listed and secured €22.5m (~ $26m) on Euronext Amsterdam. Probiodrug develops drugs for Alzheimer’s disease and already has its lead candidate in phase 2 development. “We chose Euronext, as it has evolved into the leading European exchange and trading platform for technology companies, including those in the life sciences,” explains Konrad Glund, CEO. “Our IPO together with the follow-on financings, demonstrates the successful access to and acceptance of international investors. We have raised approximately €50m (~ $59m) over the last three years.”

Geneuro is a Swiss company that focuses on diseases of the nervous system and autoimmune diseases. It listed in 2016 on Euronext Paris and raised €33m (~ $39m) after its IPO. “Our domestic stock exchange is SIX,” explains Miguel Payró, CFO of Geneuro. “Here, there are very few listed biotechs and even less SMEs. There are also less funds and analysts following biotechs than on Euronext Paris, where the biotech ecosystem is much deeper and more dynamic.” 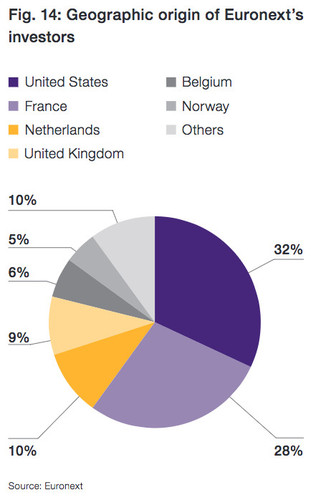 Euronext is conscious of the growth potential, funding requirements and sector-specific needs of Tech companies. As a result, Euronext has been fine tuning initiatives that offer solutions, support and visibility to both non-listed and listed innovative European businesses. To date, among the 88 life sciences companies listed on Euronext, 84 are SMEs with a an average market capitalisation of €263m.

Another solution created by Euronext is the Biotech Barometer, produced on a semester basis by Euronext and BiotechBourse. It provides the key trends and figures about Euronext-listed biotechs. This barometer includes performance indicators, investor interest and market sentiment gauges of the biotechnology sector and contributes to maintaining the visibility of Euronext listed Biotech companies to investors and the financial ecosystem. 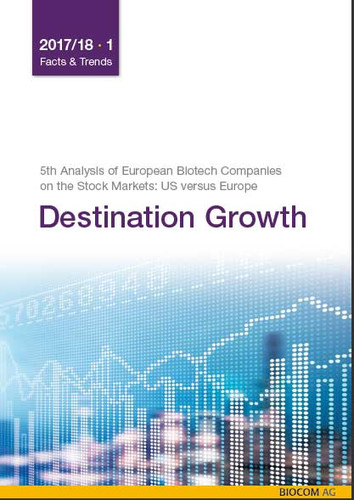 International investors and their interest in Euronext

Since a few years, Euronext has seen a growing participation of US investors. Today, it counts more than 480 declared institutional investors from 30 countries across Europe, the US and Asia investing in its Life Science community. Many businesses have seen the access to international investors as a reason to list on Euronext.

Miguel Payró, CFO of Geneuro explains: “Listing in the US is significantly more onerous in terms of work and costs than listing on Euronext or SIX. For our size at the time of our IPO, Euronext was the best choice given the number of listed biotech SMEs, of biotech investors, brokers and biotech-related events, as well as the strong and supportive EU regulatory framework.”

This text is part of BIOCOM's "5th Analysis of European biotech companies on the stock markets: US vs. Europe":

The full chapter as PDF-Download