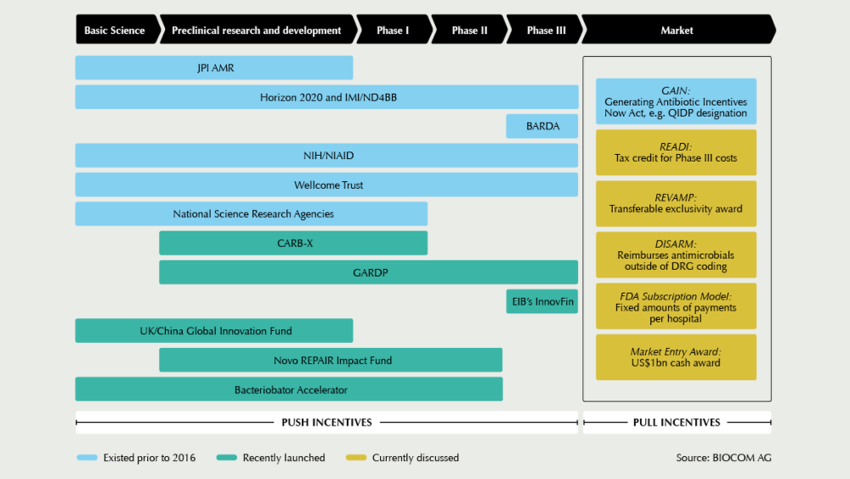 Are novel antibiotics worth investing in?

The news spread like wildfire in the AMR community: Exactly one year after US-based Melinta Therapeutics executed a US-$270m pact to buy out the Medicines Co’s infectious disease group – one in a string of pipeline expansion deals – the Connecticut-based drugmaker reported it had reduced headcount at its headquarters, laying off 22 out of 25 staff members and spinning out research projects. “Sad, but not unexpected news,” commented Kevin Outterson, head of US-based financing vehicle CARB-X, on Twitter and added: “Does anyone need more proof that the way we pay for antibiotics is thoroughly broken and we need delinked reimbursement reform immediately?”

Only two days later, G20 leaders in Argentina released their final declaration, underlining the need for urgent action: “We note the work done by the Global AMR R&D Hub and, drawing on this, we look forward to further examining practical market incentives.” In the AMR community, this message was well-appreciated; however, rather than examining the options, the implementation of pilot measures would be preferred by most stakeholders.

Particularly because there is, in principle, no lack of ideas about how to spur up the antibiotics market with market incentives. In mid-September, the US-regulatory body FDA unveiled its “2019 Strategic Approach for Combating AMR” under the umbrella of the “Global AMR Challenge” initiative, launched at the United Nations General Assembly and bundling together the commitment of over 100 organisations in the fight against AMR. “It is important to pursue new policies and reimbursement approaches now, to shift the investment landscape right away. One constructive way would be to develop innovative payment mechanisms that allow companies to capture a greater upfront share of the social value of antibiotic drug development,” FDA commissioner Scott Gottlieb said during the kick-off event co-hosted by the Bill & Melinda Gates Foundation, the Pew Charitable Trusts, the United Nations Foundation, Wellcome Trust, and the CDC Foundation. Although Gottlieb lauded the accomplishments of existing “push”-style incentive programmes, such as the Generating New Antibiotics Now (GAIN) Act and the Limited Population Pathway for Antibacterial and Antifungal Drugs (LPAD), in generating new drug R&D, he noted that in spite of these efforts only 11 antibio-tic products that are designed to address the most-threatening pathogens, as identified by the World Health Organization (WHO), are currently in clinical trials.

He thus advocated for stronger “pull” incentives, including new reimbursement models that would provide milestone payments and subscription fees for new FDA-approved antibiotics with demonstrable clinical and social values. Pilot projects based on new market incentive models are also prepared at NICE in the United Kingdom, as AMR experts told European Biotechnology, but currently financing is still under discussion. In most other European countries, however, government‘s priority action goes into push funding.

During the Antibiotic Awareness Week in November, for instance, the French government committed €40m to academic research, and Denmark announced they would host a new international research centre for global solutions on AMR. A month earlier, Germany earmarked €500m for global AMR activities, of which about €40m will flow into CARB-X to build up a European office in Germany. Swiss regional agency Baselarea.Swiss also joined this initiative as a new European hub. How this kind of non-profit public-private financing could also be used to leverage private investments was discussed during a workshop at the World Investment Forum in September, organised by the United Nations Conferences on International Trade (UNCTAD) together with the WHO. Experts explored major gaps in AMR financing and how to bring in new investors. During the Novel Antimicrobials & AMR Diagnostics conference, held from 14–15 March 2019 in Berlin, UNCTAD and WHO will host a session to determine requirements for structuring a new global AMR fund.

Meanwhile, another European investment initiative called Bacteriobator Accelerator popped up in Germany. “We already have €50m pre-negotiated, available from private investors and are now in the process of structuring it for investments. Our aim is to incubate or accelerate the most promising academic and post-academic projects until clinically relevant stages so that further capital may step in,” Christian Riemann, from Munich-based Global Investment Bridge Capital AG, who runs Bacteriobator Accelerator, told European Biotechnology. "The money will target the whole range of AMR innovation. We look into new therapeutic, diagnostic, as well as hygienic approaches, such as antiseptic agents and materials in Europe and the US. This allows us to balance our risk-return profile, over a medium-term time frame of 4–6 years," Riemann says.

How to reduce R&D costs

One of the biggest challenges for most of the existing AMR-active smaller companies, however, is to reduce R&D costs. A new solution could be provided very soon by three companies, BioSystems Technology (UK), BioVersys (CH) and Voxcan (FR). Under the umbrella of the EU-funded IMPACT2 consortium they joined forces to establish a novel translational AMR platform. “With respect to AMR R&D, the basis on which new antibiotics are discovered and tested uses old standard methods to characterise novel compounds, and they do not suit all types of approaches, such as anti-virulence compounds,” explains Jonathan Butcher, Head of Business Development at BioVersys. The new platform is combining BioVersys‘ capability to genetically manipulate multi-drug and even PAN-resistant clinical isolates, Biosystems Technology’s moth larvae model and Voxcan’s imaging technologies for generating real-time animal model infection data with up to date clinical isolates. It provides services for discovery and preclinical stage projects – target validation and confirmation, compound screening in larvae, toxicity and in vivo efficacy testing, covering Gram-negative pathogens like A. baumannii and K. pneumoniae. “Our combined technologies will allow for a faster, cost-effective and ethical development of novel AMR compounds, both traditional and non-traditional,” Jonathan Butcher says.