Proteins, the key products of the central dogma of molecular biology, are the basic building blocks of life. Proteins perform various functions such a screating cellular matrices, catalyzing biochemical reactions, and forming signaling pathways to respond to external stimuli. Studies of the structure and function of proteins hold the key to understanding the “meaning of life,” so they are pursued by scientists across multiple disciplines. However, because most proteins of interest are difficult to obtain, it is important to establish sources that could potentially provide researchers with unlimited supply of proteins. Recombinant protein expression is the process in which a gene encoding a protein-of-interest is cloned into an expression vector (usually a plasmid) and transferred into a host cell for protein production by harnessing its intrinsic protein synthesis machinery.Several host cell systems have been established for recombinant protein production and the selection of the optimal host for any given protein is a major factor for its successful expression. The advantages and limitations of commonly used expression hosts are summarized in Table 1.

To deliver a target gene into the cells and achieve protein expression, insect cells require baculovirus as an intermediate. Baculoviruses represent a diverse group of DNA viruses that are capable of infecting various (>600) insect cells. They serve as a shuttle for the introduction of a target gene into a given host cell. Autographa californica multiple nucleopolyhedrovirus (AcMNPV) is the best-characterized baculovirus for this purpose and it is widely used for insect cell-mediated protein expression. A flow chart of this process is presented in Figure 1. Briefly, a gene encoding the protein-of-interest is inserted into a primary vector, which is subsequently cloned into a secondary vector known as Bacmid. Bacmid is transferred into a bacteria strain (commonly E.coli) for preliminary virus production and assembly to obtain generation 1 baculovirus (P1). The P1 virus is amplified in an insect cell (e.g., sf9) to achieve a suitable titer (P2), which is then used to infect the same or a different insect cell line (e.g., High-five) for protein expression. This “Bac-to-Bac” system has been adapted for the expression of a wide variety of proteins as secreted, intracellular, or membrane-bound molecules. Of note, there are many commercially available methods for baculovirus generation.

Insect cells are versatile expression hosts for a range of recombinant proteins. They are excellent choices for the expression of complicated intracellular and viral proteins because of their robust protein folding capability and relatively high culture density. In 2007, Cervarix, a human papilloma virus vaccine produced using insect cell line in the format of virus-like particles was approved for human use. Highly active proteins produced in insect cells are used in various disciplines including structure elucidation, drug design, assay establishment, and diagnostic reagent development. To obtain fully functional recombinant proteins, a systematic design is required for each step from construct design and culture optimization to protein purification and protein formulation. Here, we describe two cases to demonstrate key features of recombinant protein expression using BEVS.

Insect cells are often used to produce large molecular weight (MW) proteins (MW> 150 kDa) because of their superior folding and posttranslational modification capabilities. One major downside of this endeavor, however, is the structural complexities of such proteins, which often results in relatively low yields (Fig. 2, left). One alternative approach is to express a domain-of-interest rather than the entire protein; however, in the case presented here, the direct expression of two enzyme domains of human fatty acid synthase (FASN) was not feasible because of low protein yield and heavy degradation (Fig. 2, middle). By extrapolating and fusing the sequences encoding the methyltransferase and ketoreductase domain with a linker, we successfully obtained a high-yield construct (Fig. 2, right). The Elute 1 and 2 of this construct were pooled and further purified to yield a final fusion protein with >90% purity.

Some proteins require certain oligomeric formations to be functional. For example, the hemagglutinin proteins of influenza virus and the spike protein of SARS-CoV-2 exhibit a trimeric format, whereas the human prolyl endopeptidase, FAP, is an intrinsic dimer. Caution should be exercised during the purification steps to track the protein fractions with the correct oligomeric status to ensure proper protein activity. In this study, a his-tagged protein was expressed using BEVS and the Ni-affinity eluate contained a mixture of its monomer and dimer. Because the protein is active as a dimer, a second gel-filtration purification step was required to enrich the protein dimer. The dimeric conformation of the final product was confirmed by SEC-HPLC and the protein exhibited reproducible enzymatic activity between two different batches using the established method. 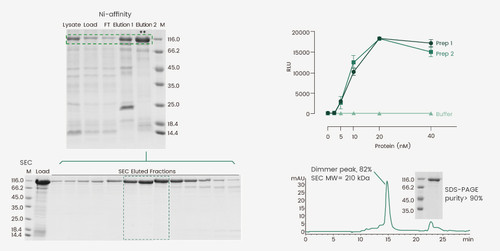 Recombinant proteins are fundamental to the study and development of biologics. Insect cells are a superior choice as an expression host because they enable correct protein folding and posttranslational modification, and are suitable for high-density cell culture. They can produce both secreted and intracellular proteins of various species. A systematic design and optimization approach is essential to obtain high-quality recombinant proteins using insect cells.