Biotech stock markets are still appreciated by investors. Whereas the number of IPOs significantly decreased in the first half year of 2018 compared to 2017, follow-on financings doubled. This is particularly true for European stock exchanges. Nurtured by the further progress of breakthrough technologies such as CAR-T for cancer therapies, listed European biotech companies profit from a sustained optimism among investors.

Biotech stockmarkets have developed reasonably well in 2018 so far and IPOs are still a viable route to access further capital. Although there have been no record-breaking highs, an overall growth trend is still obvious. According to the analysis, which also includes all European biotech firms listed on the US Nasdaq, all of the key figures for 2018 so far show a sustained optimism. The 240 European biotech companies raised a total of €2.54bn in financial proceeds by the half year of 2018 – 40% more than in the same period of time in 2017 (€1.81bn).
When it comes to IPOs and listings, however, 2018 showed a slight increase. A total of five European biotech IPOs took place, raising a total figure of €355m. This means a plus of 4% compared to the same period in 2017. Four companies opted for one of the 14 European trading centres, and one floated on US Nasdaq.

Whereas Swiss company Polyphor SA raised a very high volume of €130m, the other three Europe-based IPOs rested more at the lower end – Polish OncoArendi Therapeutics S.A. (€13.7m), Danish ViroGates A/S (€10m), and Swedish Calliditas Therapeutics AB (€72, incl. overallotment). The Nasdaq IPO of UK-based Autolus Therapeutics reached a total of €129.5m. In addition to the IPOs, two new listings that did not raise additional money took place on the Nasdaq Nordic Stock Exchange in Stockholm (Fluicell AB and Gabather AB). With this activity, the list of the most attractive stock market locations changed slightly. Paris (47) is still at the top, although it has had no biotech IPOs so far in 2018. Currently, Stockholm (44) and London (44) share second place; the stock exchange in Sweden is now home to three more listed biotech companies. The shares of 39 European companies are currently traded on US Nasdaq. In addition to the IPO, two secondary listings (MorphoSys AG and Biofrontera AG) took place. 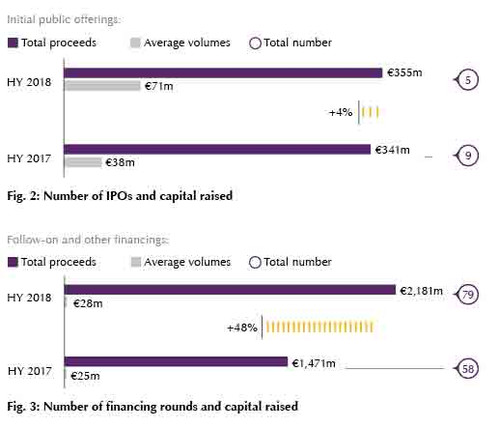 Oncology in the spotlight

The vast majority of companies (85%) are active in the health sector, developing diagnostics or new therapies for which major investments and long-term financial strategies are required. All of the five stock market newcomers in 2018 can be assigned to this category. The most attractive field within the health area is oncology. A total of 74 companies operate in this field, followed by neurology (36), inflammatory (31) and metabolic diseases (29), as well as auto-immune diseases (27).

Service providers that offer biotech-based processes for others in the B2B environment have a completely different risk profile than companies focused on biopharma. Although mid- and large-cap companies such as bioMérieux and Eurofins fall into this category, only 14 companies overall operate in this field. Another area of listed European companies is industrial biotechnology. A total of 21 firms are involved in the development of new enzyme-based processes or biobased solutions for various industries. With 14 different trading centres, the variety of stock exchanges relevant to European biotech companies is huge. Analysis of previous years has revealed that the cross-border stock market Euronext is especially attractive for European biotech companies, as it clearly provides a critical mass of listed biotech companies as well as a nurturing environment in terms of innovation and high-risk financing. However, in 2018, less activity took place here and no biotech company went public. But the Euronext-listed companies succeeded with follow-on financings – in particular those with a double listing in the US (Cellectis and DBV Technologies). The first half-year of 2018 also demonstrated that the other cross-over exchange in Europe, the Nasdaq Nordic, is catching up. With the IPO of ViroGates A/S in Copenhagen, two new listings at Stockholm First North, and three Swedish companies changing from First North in Stockholm to Nasdaq Nordic Main (Nuevolution A/S, Immunovia AB, Immunicum AB), significant activity took place there in 2018.

Another sign for sustained optimism in the European stock market comes from the two well-received IPOs in Switzerland and Poland. That the antibiotics developer Polyphor succeeded in raising €130m in its stockmarket debut on the Swiss Stock Exchange (SIX) demonstrated the high potential of life sciences capital available for attractive biotech stories, even in challenging markets such as anti-infectives. At the same time, it underlined the strong position of SIX in 2018. Reproductive health specialist ObsEva, already listed on Nasdaq, also announced a new listing in Switzerland.* The IPO of Polish drug developer OncoArendi on WSE increased the number of listed companies in Warsaw to seven. The company, founded in 2012, focuses on novel therapeutics for neoplastic and inflammatory diseases. They have an asthma-treatment candidate in clinical Phase 1 and an immunotherapeutic approach – based on arginase inhibitors to be used as a combination therapy for the treatment of patients with colon, lung, skin, or brain cancer – in preclinical development. The IPO was met with significant demand from both institutional and individual investors and the proceeds are aimed at bringing forward licensing agreements and strategic partnerships on an international level.

The first six months of 2018 saw quite modest activity for new European biotech companies on Nasdaq. The only IPO took place in June, when cancer biotech Autolus Therapeutics plc from UK went public in New York. The company, which is developing blood cancer therapies based on highly targeted CAR T cells, succeeded in raising a total of €129.5m, with a share price at the upper end of the range. In addition, two already-listed German companies decided to go for a secondary listing on Nasdaq this year: MorphoSys AG (€168m) and Biofrontera AG (€10m). Antibody specialist MorphoSys gained much interest due to its late-stage biotech drug candidate MOR208, for which market approval is within reach. So far, overall activity for 2018 demonstrates a positive stock market development for European biotech companies. But traditionally, the first half year shows lower activity than the second half of the year. For this reason, many experts expect an ongoing positive trend, so that numbers in the upocoming month may possibly exceed those recorded in the first six months.

Report is available as PDF-Downoad.