Due to its broad spectrum of investors, the US Nasdaq continues to be an attractive stock market for European biotech companies, particularly when they are in late-stage development or active in promising areas such as immunotherapies. In 2018, Nasdaq saw one European biotech IPO, two secondary listings from European companies, and strong follow-on financings. Overall figures are much higher compared to 2017. 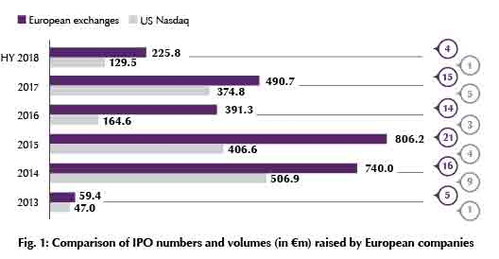 IPOs and listings on Nasdaq are particularly interesting for companies which need a large amount of capital. This holds true for the field of CAR-T-focused companies at the beginning stage of clinical development, such as Autolus Therapeutics. The company was spun out from University of London in 2014, has a pipeline of product candidates in development for the treatment of haematological malignancies and solid tumors, and in June 2018 achieved a successful IPO on Nasdaq, raising €129.5m in total at the upper share price range.

Compared to last year, the volume increased by 44%. The only IPO in the first half of 2017 was Swiss ObsEva, which brought in €90m. However, IPO volumes in 2018 were rather atypical: the largest volumes in the US and Europe were nearly at the same level – both approximately €130m (Polyphor and Autolus). In total, 39 European biotech companies were listed on Nasdaq at the end of the first half of 2018. They raised total financial proceeds of about €1.3bn via IPOs, secondary listings, and follow-on financings. This is a significant gain of 50% compared to the same period in 2017 (€897.5m), demonstrating an unbroken investors’ appetite in European biotech companies. For the second year in a row, capital investments show a growth trend not only in numbers, but also in volumes. The development is driven by a constant flow of good company news, primarily from technology firms focusing on new therapeutic approaches such as gene therapy, CRISPR or cancer immunotherapies. Other more uncertain conditions – such as the US president’s pharma strategy – apparently had less influence on the stock market. Experts foresee an ongoing positive trend for biotech companies on US Nasdaq in 2018.

The 39 listed European biotech companies attracted a combined total of €1.215bn in 14 follow-on financings, which means an increase of 50% compared to 2017 at the same time (€807.5m; 9 financings). The numbers also include the two secondary listings of German biotech companies MorphoSys and Biofrontera, which amounted to a total combined capital of €178.4m.
Compared to their counterparts that are only listed on European stock exchanges, the firms on the US Nasdaq not only generated more capital in total numbers, but also with much greater average volumes (US: €86.8m vs. Europe: €14.9m). This again demonstrates that US Nasdaq offers a valuable platform for clinical stage companies with a high capital demand.