Following a more cautious year 2016, the European public biotech sector observed an new increase of IPO and follow-on financing volumes in 2017. Riding on the wave of this development, new found confidence is growing.

In 2017, a total of 19 European biotech IPOs took place, raising a total figure of €815m. This year shows an increase of 47% on the same period in 2016. The majority of 15 firms opted for one of the 14 European trading centres, with four firms floating on US Nasdaq, instead. Compared to the previous year, investor appetite was higher and the sums larger. The greatest IPO volumes in 2017 were recorded for ObsEva SA (€90m), InflaRx (€85m)  and Nucana Biomed (€86m) on the US Nasdaq.

Currently, the most attractive stock market locations are Paris (47) and London (44). However, the number of listed biotech companies in Sweden has also increased by up to 41. The shares of 35 European companies are currently traded on US Nasdaq  and the most recent US IPO was conducted by German InflaRx (€86m). 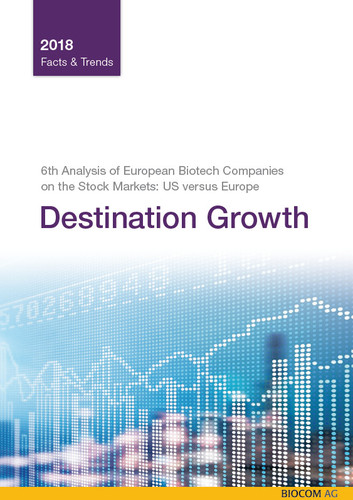 US investors’ appetite was revived in 2017 following a decline in 2016. The 35 listed companies attracted a combined total of €1.83bn in follow-on financings, including 5 secondary listings which alone amounted to a total capital of €553.3m. Compared to their counterparts which are listed on European stock exchanges only, the firms on the US Nasdaq generated significantly more capital this year and with greater average volumes (US: €81m vs. Europe: €32.7m).

This text is part of BIOCOM's "6th Analysis of European biotech companies on the stock markets: US vs. Europe":

The full report can be downloaded here: PDF-Download