In 1952, Joshua Lederberg introduced the world with the concept of "plasmid" and it has since then been recognized as a circular DNA that serves as a viable carrier to introduce a foreign gene into a host cell. The discovery of various plasmid systems allows the development of recombinant protein expression technology and opens the possibility of mass production of proteins of interest that are otherwise of low abundance within their natural "habitats".

In parallel with the development of plasmid systems, another pivotal element to facilitate the production of the most biologically relevant recombinant proteins is the selection of expression host. While E.coli is often considered as a major work-horse for recombinant protein expression, it has limited capability for protein folding and also lacks the machinery to add suitable post-translational modifications onto target proteins. Advanced eukaryote cells, such as yeast, insect cells, and mammalian cells (HEK293 and CHO) have been developed. However, every system has its advantages and limitations (Table 1). 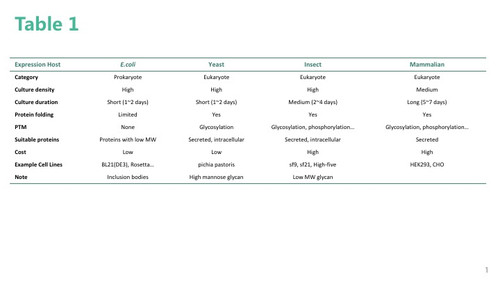 Insect cells require an intermediate, baculovirus, for protein expression. Baculoviruses are a diverse group of DNA viruses that are capable to infect various (>600) insect cells. They serve as a shuttle for the introduction of the target gene into a given host cell. Autographa californica multiple nucleopolyhedrovirus (AcMNPV) is the best characterized and utilized baculovirus for this purpose. A flow chart of the process is summarized in Figure 1. Briefly, a gene encoding the protein-of-interest is inserted into a primary vector, which is subsequently cloned into a secondary vector called "Bacmid". The Bacmid is transferred into a bacteria strain (commonly E.coli) for preliminary virus production and assembly to acquire generation 1 baculovirus (P1). The P1 virus is amplified in an insect cell (e.g. sf9) to reach the suitable titer (P2) and the P2 virus is then used to infect the same or a different insect cell line (e.g. High-five) for protein expression. 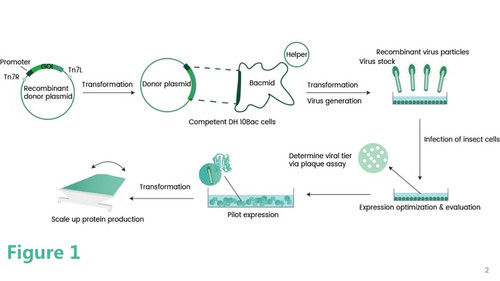 Insect cells are versatile expression hosts for a range of recombinant proteins. The strong folding capability and relatively high culture density make them excellent choices for the expression of complicated intracellular protein and virus proteins. In 2007, Cervarix, an HPV vaccine produced by an insect cell line in the format of virus-like particles (VLPs) was approved for human use. Besides potentials in therapeutic and vaccine development, highly active proteins produced in insect cells are widely used in a variety of disciplines in biophysics and biochemistry for structure elucidation, drug design, assay establishment, and diagnostic reagent development.... Sino Biological uses insect cells extensively for recombinant protein product development and contracted research projects. Here, we would like to present a few application notes and case studies to demonstrate the power and versatility of the insect cell expression system.

Recombinant proteins are fundamental to the current biologics development landscape. As an excellent choice of expression host, insect cells enable correct protein folding, PTM, and they are suitable for high-density cell culture and produce both secreted and intracellular proteins across various species. Certain technical know-how is required for protein design and a systematic optimization approach is essential for obtaining high-quality recombinant proteins via insect cells.